The demographic dividend and the ways in which population could be considered a resource when contemplating possible futures.

A. What is the "demographic dividend"?

'Countries with the greatest demographic opportunity for development are those entering a period in which the working-age population has good health, quality education, decent employment and a lower proportion of young dependents. Smaller numbers of children per household generally lead to larger investments per child, more freedom for women to enter the formal workforce and more household savings for old age. When this happens, the national economic payoff can be substantial. This is a "demographic dividend."' 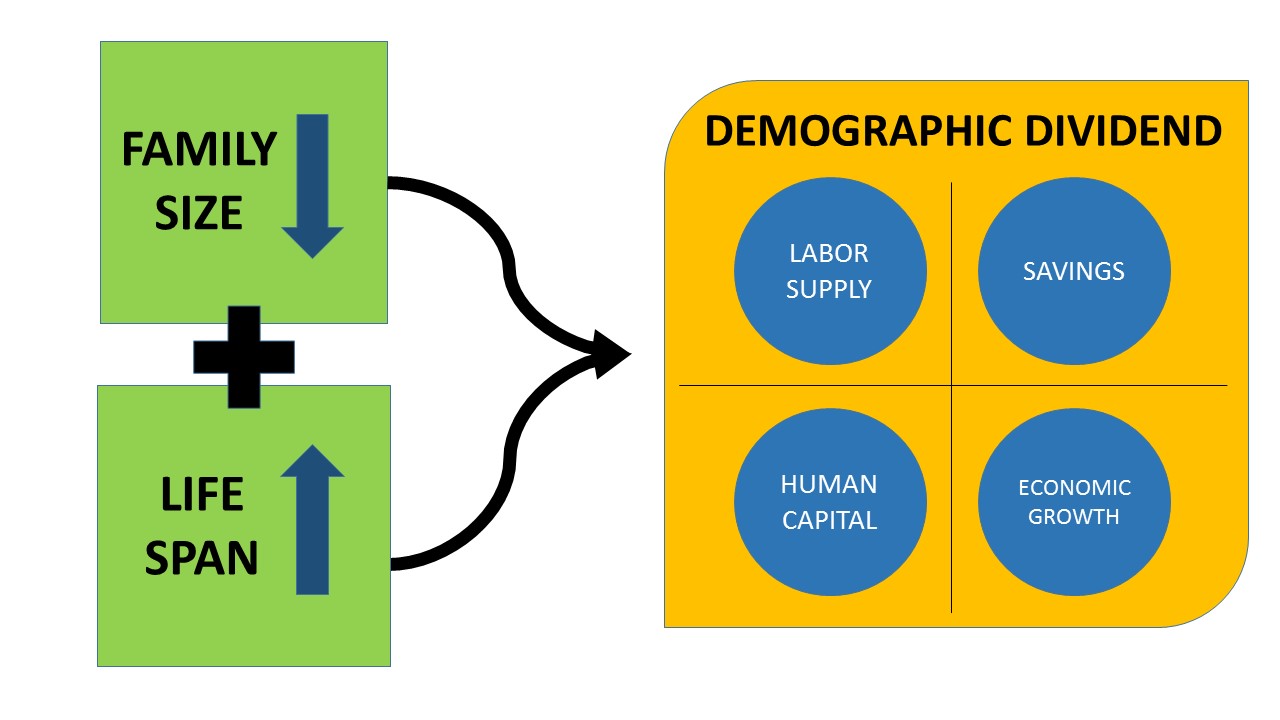 From https://www.populationeducation.org/sites/default/files/dem_dividend5.jpg
'Industrial countries have largely completed what is called the "demographic transition"—the transition from a largely rural agrarian society with high fertility and mortality rates to a predominantly urban industrial society with low fertility and mortality rates. At an early stage of this transition, fertility rates fall, leading to fewer young mouths to feed. During this period, the labor force temporarily grows more rapidly than the population dependent on it, freeing up resources for investment in economic development and family welfare. Other things being equal, per capita income grows more rapidly too. That's the first dividend.

This dividend period is quite long, lasting five decades or more, but eventually lower fertility reduces the growth rate of the labor force, while continuing improvements in old-age mortality speed growth of the elderly population. Now, other things being equal, per capita income grows more slowly and the first dividend turns negative.
​
But a second dividend is also possible. A population concentrated at older working ages and facing an extended period of retirement has a powerful incentive to accumulate assets—unless it is confident that its needs will be provided for by families or governments. Whether these additional assets are invested domestically or abroad, national income rises.'

B. Identifying countries who might experience a demographic dividend

Check back on the newspaper article at the end of the page on Ageing Populations -  here.
To what extent does this article support the idea that Ireland is experiencing the second Demographic Dividend?